Founding of the United Methodist Church

The Methodist Churches throughout the world originate in the inspiring life’s work of the Anglican clergyman John Wesley (1703-1791).  As a young man attending a prayer meeting on Aldersgate Street in London, he felt his heart “was strangely warmed.”  For the rest of his life he traveled across Great Britain and Ireland preaching God’s love and God’s grace to the poor and destitute. 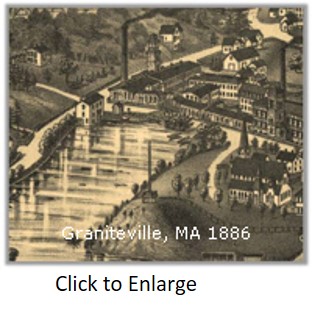 Growth of the Graniteville Section of Westford

In his History of Westford (1883), Rev. Edwin R. Hodgman says of Graniteville, “this village owes its existence to its water power and to the building of the railroad in 1847…Its development is chiefly due to one man who came there in 1854.”  That man was Charles G. Sargent (1819-1878), who moved from Lowell to begin both his machine shop and, with John W. P. and John W. Abbot, the Abbot Worsted Company.  The village grew rapidly with the growth of these industries and of the quarries on Snake Meadow Hill

Founding of the United Methodist Church of Westford (UMCW)

As early as 1852, the villagers voted “to have the School House opened for public worship.”  In 1869, Mr. Sargent remarked “that there should be preaching regularly in Graniteville, and that he would pay liberally toward its support.”  This remark was passed on to leaders of the Methodist Episcopal Church in Lowell, and a young ministerial student from Boston University was appointed to start a church in Graniteville.  Miner Harlow Amos Evans, Jr., the first pastor, preached his first sermon in Graniteville on Sunday, July 4, 1869, in the old District #10 Schoolhouse.  “The congregation filled the room to its fullest capacity, and many stood in the ante-room and others around the windows, it being very warm.  It should be mentioned that there was not at that time a Methodist in the place.”

The first meeting of the officers of the church was held in the kitchen of Arthur Wright on August 3, 1869.  Arthur Wright lived at a newly built home at 11 North Main Street.  This home was for many years the home of Dick and Ruth Hall of the church, and it remains in their family.

Miner Evans had served in the Quartermaster Department in the Civil War.  After the war he worked for the Freedmen’s Bureau establishing homes and schools for former slaves in the vicinity of Charleston, S.C.  He was a student at the Boston Theological Seminary (now the School of Theology at Boston University, founded as a Methodist college), when he was called to Graniteville in 1869.  He continued as the first pastor until April 1871, when he became pastor of a church in East Boston.  In January 1872 he married Harriet Rebecca Sargent, oldest daughter of Charles G. Sargent.  He returned to the Graniteville church as our fourth pastor, from 1876-1879.

In 1870, construction was begun on the Gothic style church building on land donated by Mr. Sargent, whose bas-relief bust, donated by Rev. Evans, still hangs at the back of the sanctuary today.  Mr. Sargent also paid for about half the cost of the church building.  In the deed Mr. Sargent specified that the “building shall be of the same style and size as the new Baptist Church now in the town of Chelmsford Center.”  It is a mirror image of that church.  The first service in the new church was held in the vestry (the large room formerly located beneath the present balcony) on November 20, 1870, since the main auditorium was still under construction.  The new church was formally dedicated on Wednesday, March 22, 1871, to a large gathering, including many from Lowell who arrived by train.

In the late 1870s the church acquired the house once located at 4 Church Street for  its parsonage.  It was used for this purpose until 1961, when the present parsonage at 6 Church Street was built.  The “Old Parsonage”, as it was called, was then used for Sunday School classes and other church meetings until 2002, when it was sold and moved to its present location at 4 River Street, where it is now a private home.

Church membership grew significantly in the last quarter of the 20th century as Westford’s population increased.  In 2000, the church mounted a $2.5 million capital improvement campaign.  As a result, the sanctuary was turned 180 degrees and a balcony was installed to expand the church’s seating capacity.  In addition, a new education wing was added and the kitchen was modernized and expanded.

Back in the last 1870s, Rev. Evans was succeeded by his half-brother, Rev. Nathaniel Benjamin Fisk.  Like his sibling, Rev. Fisk was a graduate of the Boston Theological Seminary.  This was typical of many of the pastors of the church over the next century.  They were often students at or recent graduates of the Boston University School of Theology.  They came from across the U.S., from four provinces in Canada, and from England, Isle of Man, Denmark and Ghana.  They and their wives brought God’s word to the people of Graniteville, served for a year or two, and typically moved on to distinguished service in the Methodist Church as pastors, missionaries, teachers or administrators.

In recent years our pastors have been more experienced clergy from the church’s New England Conference, and have typically stayed with us for an average of five to ten years. Since the late 1980s, we have been blessed by the leadership of Rev. Dick Pittinger (now deceased), Rev. Dr. Wayne Kendall (retired), Rev. Anne Robertson (Executive Director of the Massachusetts Bible Society), Rev. Bill Flug (retired) , Rev. Jim Cann (now deceased), and presently, Rev. Dr. Seok-Hwan Hong.